Gorongosa National Park is located in central Mozambique, on the southern edge of the Great Rift Valley. With approximately 4,000 square kilometres (1,500 sq mi), the park boasts a remarkable biodiversity in the context of the African continent.

The region has many diverse ecosystems, such as grasslands, savannas and forests, which create unique conditions for wildlife. Herds of antelopes and elephants, lions, crocodiles, hippos, and more than 300 different bird species, can be found in the park.

The protection of this natural sanctuary dates back to the 1920s when the Mozambique Company created a hunting reserve for its administrators and guests to enjoy. Later, with the colonial and civil wars (1964-74 and 1977-92), the park suffered a major setback. It is estimated that a staggering 90 percent of large mammals, such as elephants, buffalo, zebras and lions, have disappeared from the park during this period.

What to See and Do in Gorongosa

Antelopes and various birds will be a constant presence during the entire safari. Most likely, you’ll spot big animals such as lions, herds of elephants, buffalo, zebras, hippos and crocodiles.

There are morning, midday and afternoon (sunset) safaris. The price starts at US$35 per person. A daily conservation fee of US$20 is also due.

When to Go to Gorongosa

Gorongosa an be visited from April to mid December. The park is closed during the rainy season until the end of March.

How to Get to Gorongosa

Flights to Mozambique connect the country to Europe and neighbouring destinations in Southern and East Africa via the international airport of Maputo. South African Airways and TAP are two of the most important airline providers to Mozambique.

A package holiday or a tailor-made trip are perhaps the most practical options to visit Mozambique and Gorongosa. Travel agents offer Mozambique holidays that include tropical island retreats on Bazaruto and Quirimbas Islands, besides Gorongosa. The prices vary according to the hotel category, the board basis and the travel dates.

Where to Stay in Gorongosa 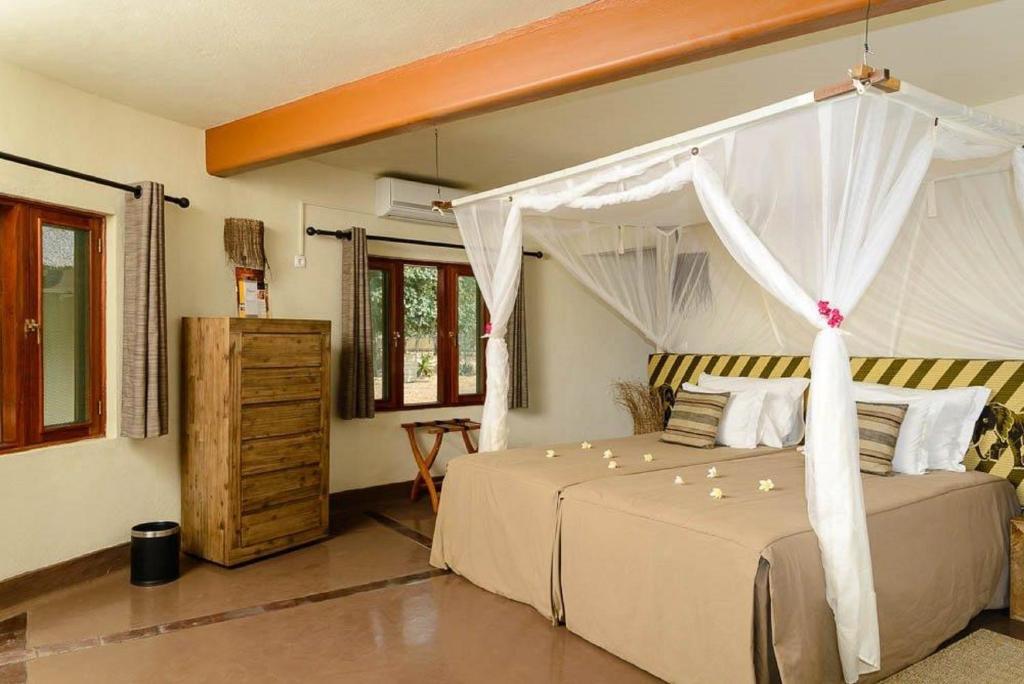 The reconstruction of Gorongosa involved the development of low-impact ecotourism designed to protect animals and landscapes. The Montebelo Gorongosa Lodge in Chitengo is integrated in the park and offers bungalows, villas, a camping area, and various services such as restaurants, swimming pools, walking paths, safaris and other activities.
Book now Montebelo Gorongoso Lodge

Depending on your country of citizenship, you may need a visa together with a valid passport to visit Mozambique.

You should see your doctor 4 to 8 weeks before your trip to Mozambique in order to check if you needed any vaccinations or other kind of medication. During your stay, take precautions against mosquitoes by using insect repellent and wearing long-sleeved shirts, pants and socks in the evening.